Where to go for help?

A quick tour of your new add-on

You're about to embark on a journey of extending Minecraft to add functionality and content that the original creators had not imagined that the game would be used for.

On the 24th of October, the scripting documentation was released to the public for review, and the scripting API made available to a small focus group to test it out (versions 1.8.0.50 and 1.8.0.51), then on the 5th of December, the API was given to the public beta community.

It is now possible for anybody to participate in the beta and write your own scripts for minecraft, and this tutorial series is here to help get you started.

Where to go for help?

There is a community dedicated to Bedrock Add-on development in Discord: https://discord.gg/46JUdQb

The bare minimum you will need are the Mojang recommended requirements:

It's highly recommended that when you install Node JS, you leave the option "Add to PATH" selected.

As of the time of writing, the scripting API is in public Beta. That means that you will need to follow the Mojang guide to get signed up for the public beta.

Now that you have all the tools installed, it's time to create your first add-on.

To get started quickly, we'll be using generator-minecraft-addon, which is a generator for yeoman, which itself is a tool made for quickly putting together a project.

Start by installing both of these tools globally.

With these installed, we'll need a directory on your computer to develop your code in, so create a directory and enter it, for the sake of this tutorial, we'll be using C:\Dev\Minecraft

Now we can create our add-on. generator-minecraft-addon will ask you a number of questions about your add-on and how you wish to develop it, this information will be used to both structure the add-on directories and create the various files that Minecraft will use to identify the add-on.

An example of the output should look like this: 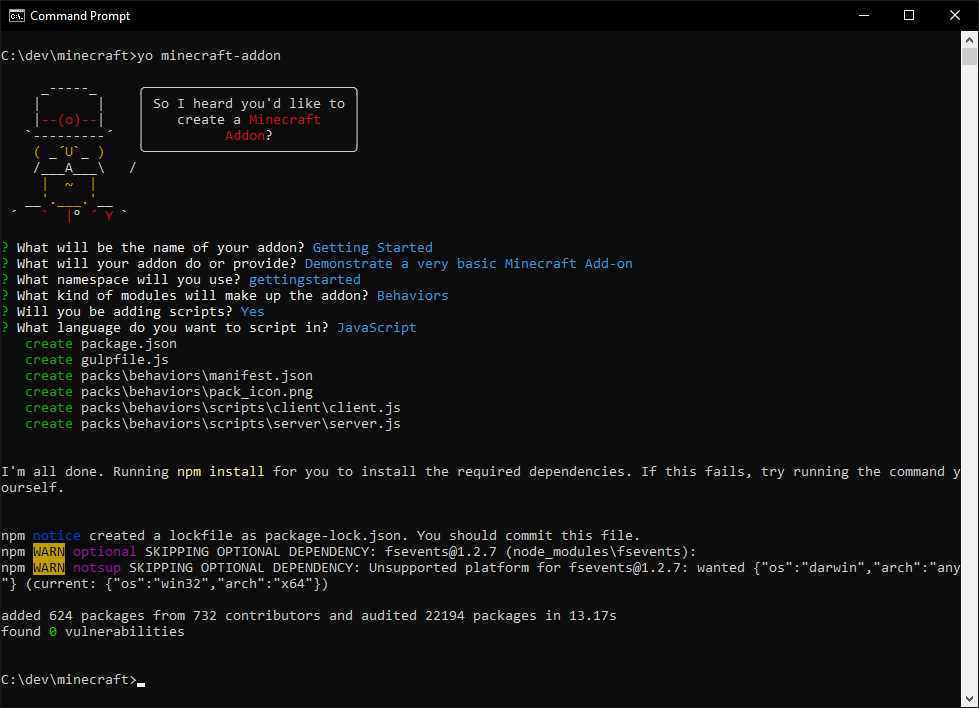 Minecraft addons are made up of two main concepts:

For the sake of this first tutorial, we do not need to change the looks, we simply want to test out and make sure that you are configured to run a script.

The use of the term behavior follows US spelling, in order to save on confusion it will always be referred to in the same spelling as in the official documentation in order to avoid something breaking because of the spelling being wrong

When setting up your add-on, you will have been presented with at least two options, JavaScript and TypeScript.

JavaScript is the add-on scripting language. It is a very widely used language, most commonly used in your web browser. It has been around in various forms since May 1995, with many new revisions and additions made to the language in the years since. At the time of writing, Minecraft supports the features that were introduced in EcmaScript 5.1 (EcmaScript being the specification for JavaScript versions).

Despite it's ubiquity, it does have a reputation in some circles for being very easy to write code that is buggy or doesn't work at all. To help with that, minecraft-addon-tools provides definitions for a language called TypeScript. The best description I've read about can be found on Stack Overflow (What is TypeScript and why would I use it in place of JavaScript): TypeScript is modern JavaScript + types. It's about catching bugs early and making you a more efficient developer, while at the same time leveraging the JavaScript community.

TypeScript is converted into JavaScript, and although it helps to write less buggy code, it does add an additional layer of complexity that will be avoided for these tutorials.

You can expect that resources from Mojang and other places around the community will be written in JavaScript.

A quick tour of your new add-on

Now that your add-on has been created, Open your IDE in the newly created directory C:\Dev\Minecraft\GettingStarted

The project has been laid out according to the expected layout of the minecraft-addon-toolchain package that we provide.

We'll use the tool chain in a moment, but first let's look at each file and directory in the project and what it's for.

If we had created the add-on with resources, there would have been additional files and directories.

Now that we've explored the files, let's try installing it into minecraft and we'll make sure that everything is running okay.

Start by making sure you have a command prompt open, and in the directory of your add-on. (If you've been following this tutorial exactly, it will be in C:\Dev\Minecraft\GettingStarted)

The output should look similar to the following: 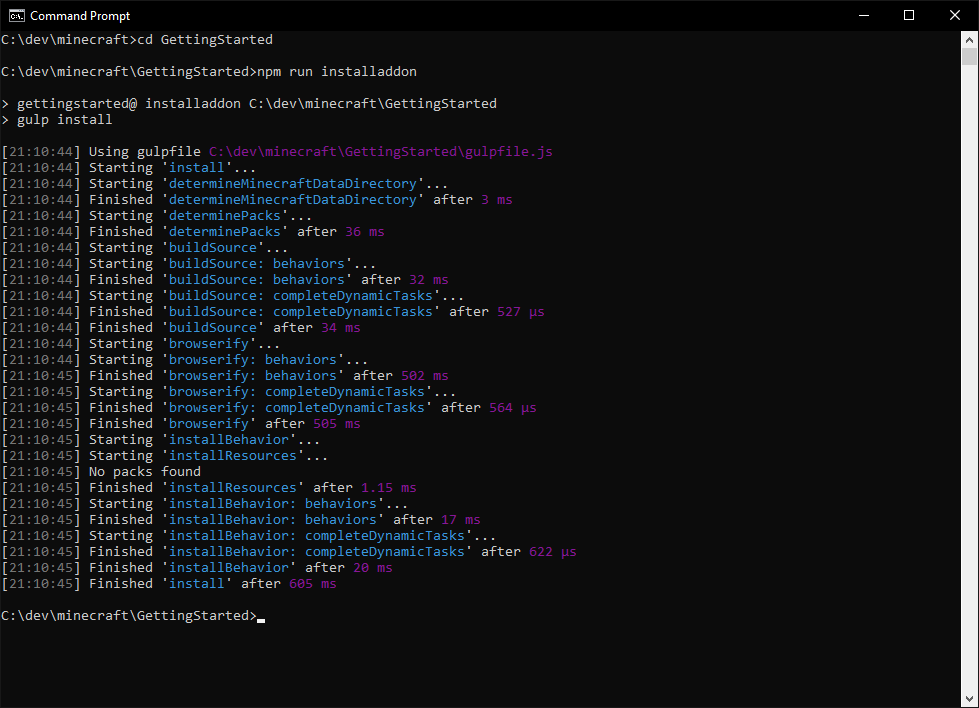 Because we did not create the project with resources, it's quite normal for no packs to be found when installing resources.

With that complete, we can now load Minecraft and test it out, here's the steps:

Because we are running with features that are not available to the general public, we need to enable experimental mode.

When the scripting API is released to the public, this will not be necessary.

If all goes well, you will be presented with a warning to enable scripts. This is an indication that Minecraft has found the scripts and is about to load them. 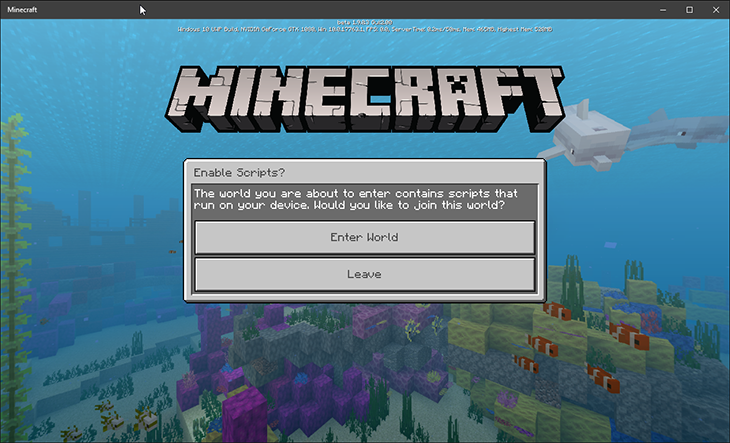 Hit the Enter World button and... you'll be in the world, but nothing exciting will have happened.

However, if you open the chat log (using the T key), you should see some text:

Introduction to the client.js script

Now that we know the scripts are working, let's take a look at what they do, line by line.

First, in your IDE, open client.js, the current code should look like this:

There's not a lot going on in this file. Everything starting with // is a comment and simply serves to describe what is going on.

The first line registers a new system with the Minecraft Client. client is a global variable provided by Minecraft and only has a couple of functions we can call.

registerSystem asks Minecraft to provide a system with the specified API version 0, 0. This provides backwards compatibility so that your add-on is more likely to run on newer versions of Minecraft without any changes.

initialize is called only once when Minecraft has finished loading everything it needs to before it can start running script code. It is not recommended that you perform any real logic in the initialize method as Minecraft may not yet have finished loading the world or other parts of the game.

update is called every game tick. A game tick is one cycle of the game logic, which happens twenty times per second.

In order to prevent the chat log from being spammed and becoming unusable, the script is configured to only run the first time Minecraft calls our update method. We do this by declaring a global variable that tracks if we have run the first tick yet, and default it to true.

Inside the update function, we check to see if the global variable is still set to true, and if so, we set it to false to prevent the contents of the if statement from running again.

The next two lines actually cause something to happen in Minecraft.

The first line, as you can probably guess is what presents the <Client Script> What are we going to do tonight Server? message. The second line sends an arbitrary message to the server, gettingstarted:pinky.

It's common to prefix messages that are specific to your add-on so that if another addon has an event with the same message they don't collide or conflict with one another. It's common for it to be the name of the add-on or an abbreviation of it in lowercase, followed by a colon, for example minecraft:

The second part of the message name is entirely up to you, and we'll get into more details about events in a later tutorial. For now, we'll say that we're broadcasting the pinky event to the server, with an object that has some data.

Introduction to the server.js script

The server script shares a lot in common with the client script.

One key difference between the two to take note of is that registerSystem is called on a global object called server, instead of client.

the system object that is returns is very similar in it's API and how it behaves as with the client's system object.

It has the same initialize and update function, and they behave the same way.

In the server script, we are listening for the pinky event that we saw was broadcast from the client, and when that event is received on the server, it will call the receivePinkyMessage function, passing in the parameters we sent.

There is no particular reason for the parameter, it merely exists to demonstrate that parameters can be used in that way. In this example, the property narf will always be true, so the minecraft:display_chat_event will always send it's message to the client.

Let's run the minecraft-addon-toolchain in watch mode make it easier to update our code in Minecraft so we don't have to run npm run installaddon every time we want to test something.

In your console terminal, run

It should follow the same steps as npm run installaddon, however it doesn't exit. It hangs on 'watchFiles' and is now watching for changes you make, and will automatically build the add-on, and install it into Minecraft every time you save a file.

It will then resume watching for more changes. 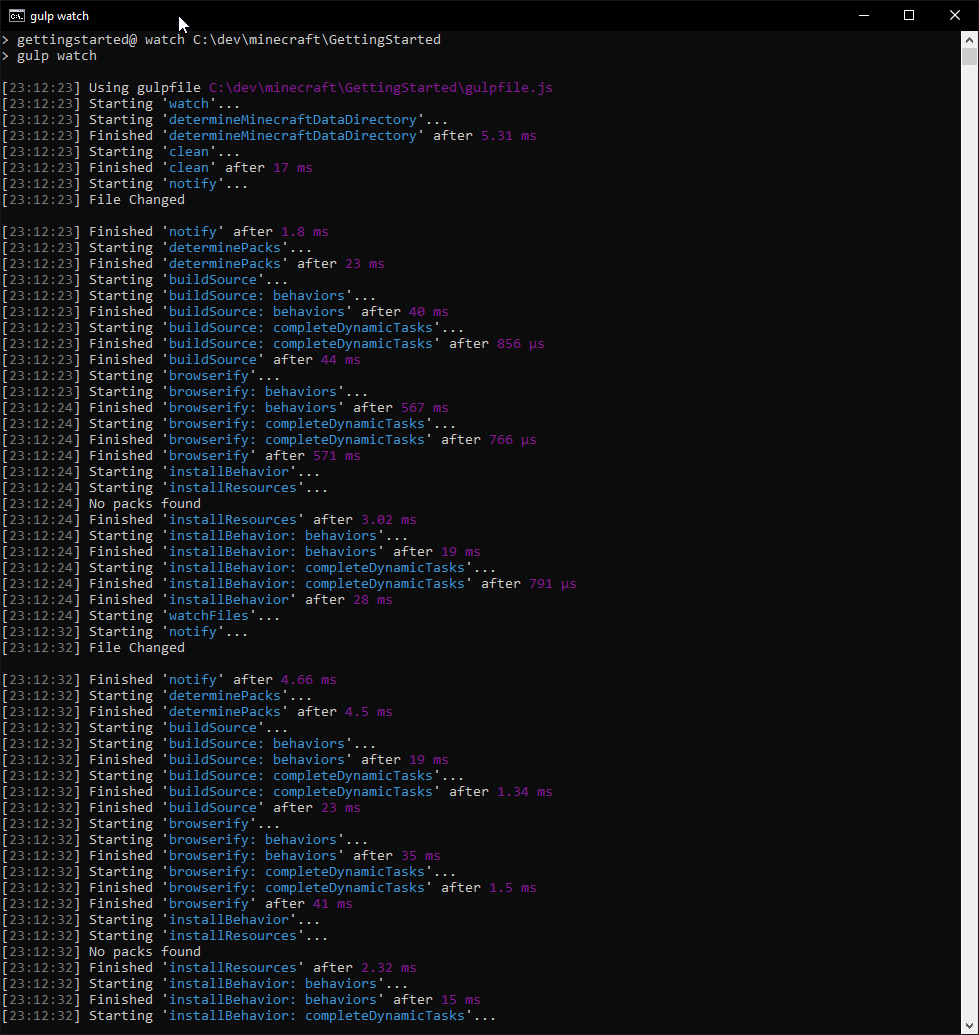 You can now leave your command line in the background and it will update as necessary.

For this tutorial, let's modify the client script to place a block underneath wherever the player is standing. Replace the update callback on the client system with the one below.

When you save the file, npm run watch should have detected the change, built the add-on and installed it into Minecraft. Unfortunately Minecraft does not have a way to reload scripts, you will need to exit out of the world (not the game, just the world) and enter the world again.

Once you've done this though, you should find that as you walk around the world, that the block underneath you is replaced with stone. The chat output is unfortunate, but hopefully we'll be able to avoid that in a later update of the scripting API. 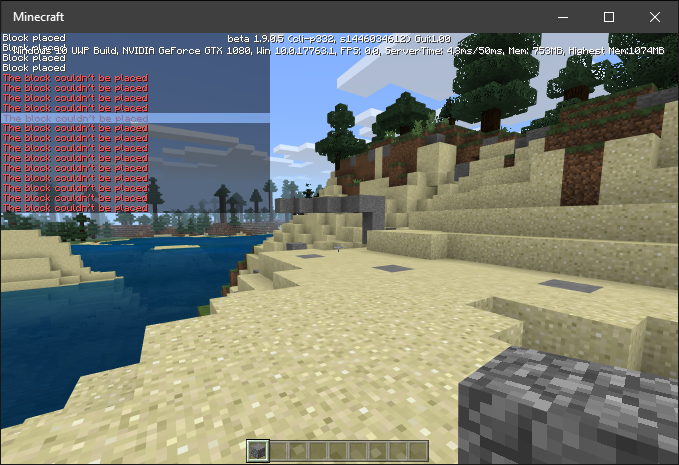 So now that we have our super-tutorial add-on and you'd like to give it to a friend to brag about, you can build an .mcaddon file that is distributable.

This will create two files Getting Started - Getting Started Behaviors - v1.0.0.mcpack, which is the individual behavior pack, and Getting Started.mcaddon. The .mcaddon file is something that will contain all of the packs in your project and can be used to distribute the project as a whole to other people.

Congratulations! If you've made it this far, you have completed the basics of getting up and running to know the tools that will help you build your Add-ons.

Next we'll take a short look at events and the client/server communications.